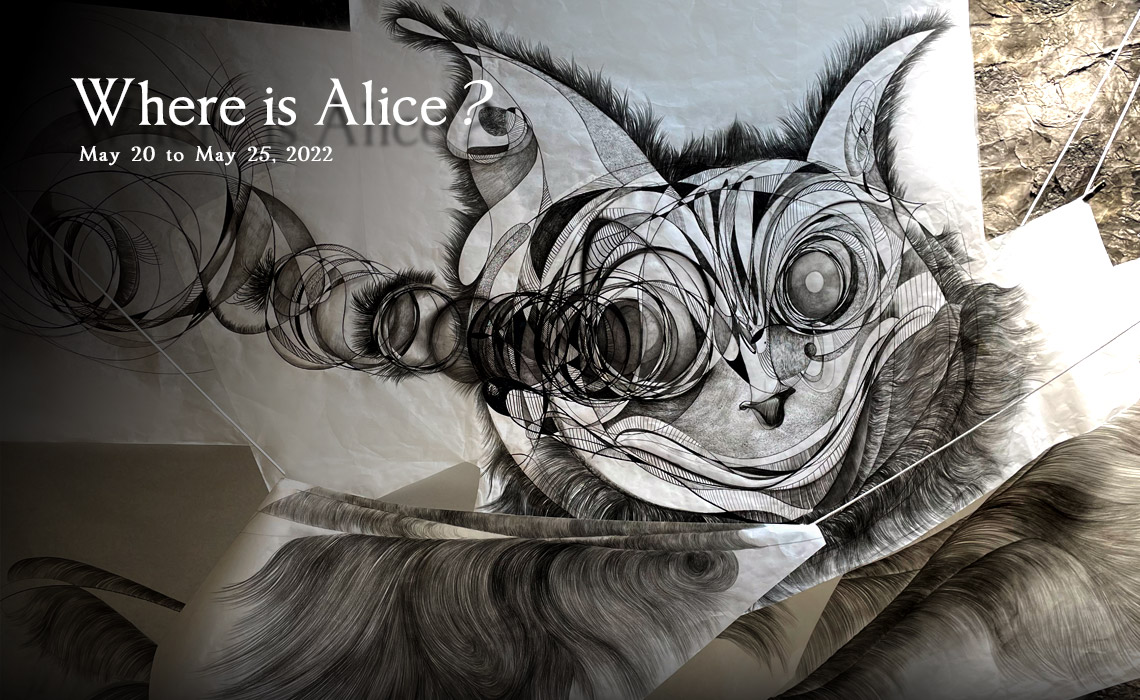 YUGEN Gallery An exhibition that immerses you in a wonderland

Alice is not anywhere but "here".

Graphic artist Maki Kahori will be holding her first all-drawing exhibition, "Where is Alice?".

Maki's core work is "products, spaces, and words that emerge from a single drawing. After graduating from Nihon University College of Art, Maki moved to the United States to study fine art in New York. After returning to Japan, she began her career as an illustrator and has worked on advertising, fashion, textiles for sports brands, and space design for corporations and hotels. With a father who is a painter, she decided at an early age to make a living by painting. Influenced by her mother, a flower arrangement teacher, she often painted "gorgeous and energetic things," such as flowers and plants, which are similar to her current works.

Drawings that continued during anxious days

Maki says that at the root of her work, she is attracted to the world of monochrome, such as the shades of ink. Maki's vivid worldview, which is now known both in Japan and abroad as something that activates the viewer's cells, was inspired by the Great East Japan Earthquake. She began to paint works reminiscent of largely shaped, tropical flowers, saying, "many people are looking for something gentle and glamorous, and I want to depict a bright world." Maki further explains that the curves that characterize her work are drawn to and represent those of flowers and plants.

The drawings she will be presenting this time are of the same type. "Two years ago, when the state of emergency was declared and all art supplies and printing shops were closed, I had to work only with what I had in my studio, which was a large amount of kraft paper. I continued to draw with pencil on thin paper, which was originally used to protect the works," Maki explains the story that led to this exhibition.

Also, unable to print large-size works, she found that when she used the printer in her studio to print out her drawings in A3-size portions and then randomly joined these parts together, a single picture emerged that she had never expected. Maki's production style, in which she does not draw toward a clear image but connects what comes out by moving her body, and draws as if responding to the world that appears as she moves her hands, has led to a new technique called wall collage.

Overlapping curves started to emerge as she simply moved her hands with the anxiety that everyone has felt in the "days of loving the landscape, painting it, and trying to solve the mystery by moving away from it." The new shapes that these overlapping curves create have emerged as a new motif in Maki's work.

In the face of the global spread of infectious diseases, I was anxious and searching for where we were headed, and I became aware of eyes and pupils that I had never painted before.

Maki says that she has never been good at expressing her intentions clearly and has never liked drawing eyes. During the emergency period, she says, she began to see intense images of people's faces and eyes that she had never drawn before. Maki describes them as "eyes that see reality" and "eyes that see their own inner selves.

The rabbit symbolizes the creature that emerged as Maki immersed herself in the time-space created by the overlapping lines. This led Maki to the world of Alice in Wonderland, which she had previously worked on as a theme but never completed. For Maki, drawing became a daily search for Alice.

In this exhibition, in addition to the drawings Maki has made over the past two years and new works, there will also be a wall painting, in which Maki draws directly on the entire wall of the gallery while setting up the exhibition space. These 30 works depict birds and rabbits that seem to escape from the curves that characterize Maki's work, as well as things that no one knows, but that seem to exist somewhere.

Maki, who has designed many spaces and specializes in installations in which she "conceives of a picture from a space," has created a series of curves in her drawings that overlap with the "caucus race," a race in which Alice and her friends spin in a circle, and the audience is transported into Alice's world. The audience will feel as if they are slipping and sliding into Alice's world.

Searching for a new world that exists nowhere else.

Now we are blissfully close to slipping unexpectedly into an absurd world. Is Alice's world a virtual world, where every place she goes is a strange place and everyone she meets is full of animals that say and do incomprehensible things?

There are infinite possibilities in creation, and people are capable of creating so many new worlds. Maki says that it is the mission of an artist to show this. Maki says that even as her life, which she took for granted, was turned upside down, she searched with what she had on hand, and even so, "I was able to create a large number of works. This is the same Alice who realized how nonsensical it was to think that life could go on in the usual way. And we realize that Alice is ourselves.

As we explore new lifestyles and values, there is a lot of talk about metaverse as a parallel world that is distinct from the real world. How inefficient, slow-moving, and ambiguous the real world is from the virtual world, which seems to be able to overcome all the limitations of reality. Where are we, Alice, who look into the real and virtual worlds, and where are we headed?

"We are still in a world of chaos. I want us to will, to surrender, and to find fun, richness, and possibility in the overlapping lines."

It is also suggestive that Maki, who has collaborated with Apple and Adobe Systems inc. and has finished all of her works digitally, so to speak, has found a new world in low-resolution pencil drawings.

While keeping an eye on reality, a world of nowhere appears if one looks closely into one's own inner world. The new world that Maki found in her studio using only paper and pencil is "now here". 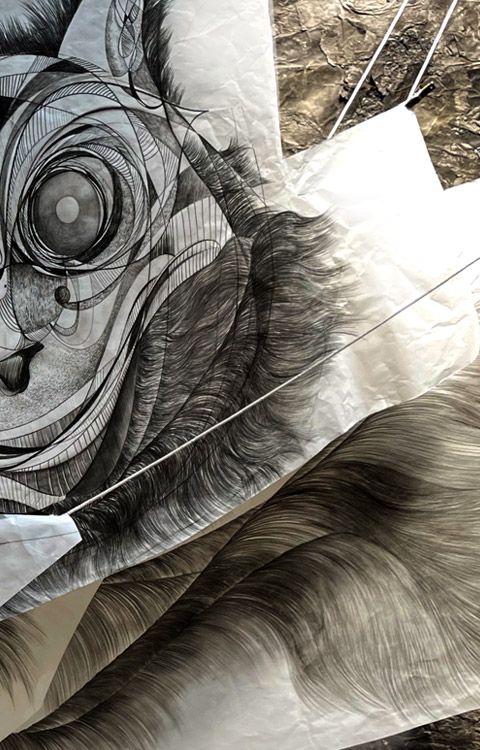